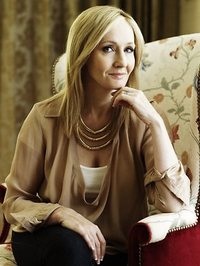 In 3º ESO we celebrated Banned Books Week (Sept. 29- Oct. 5) a little late by learning about censorship in the United States and by participating in a debate. To learn more about the process of getting a book banned in the U.S., you can visit the site "How Stuff Works" by clicking here. For a list of books banned by different governments and the reasons why they're banned, click here.

'Change for a Dollar'

Today we are celebrating Solidarity Day in the school and 1ºESO have watched this short film, directed by Sharon Wright, which inspires a 'pay it forward' ethos among viewers. A man sits on the pavement looking for loose change, but, what kind of change is he looking for? Have a look at the way he affects people's lives with just one dollar and learn that it doesn't take much to be the change in someone's life.

What Does an Accent Tell Us About a Person? 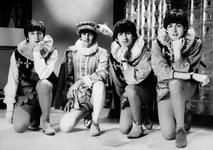 This week in 3ºESO we talked about the importance of different accents in British society and how accents can go in and out of style. In this article, posted on Slate.com, the author talks about the use of American accents by British groups and singers, such as The Beatles or Adele. Listen to Adele's Skyfall here or Green Day's Good Riddance below to hear the difference. Which "fake" accent do you prefer?

Are you studying for the First, Advanced or Proficiency and looking for a way to better your listening skills without having to do the same old boring gap-fill exercises? NPR.org is a national radio station from the United States that offers a great segment called This American Life. You can download their weekly broadcast in the form of a podcast and listen on the go. Recent topics that have been discussed on the show are "Tribes" or how to fit in, and "Starting from Scratch". What would you do if you could start over fresh?

How to Train Your Dragon

This week we watched the movie How to Train Your Dragon, a movie about a Viking teenager who is confused about his role in the community he lives in and has to make a tough decision about whether to stand by his father or stick up for what he believes in. What about you? Have you ever had to make a decision and go against the opinions of your friends and family? Do you still think you did the right thing?

In order to observe Black History Month, we will be going back in time to debate about slavery in the United States. One person in each debate will be defending the position of Harriet Tubman. To learn more about her life, watch the video below.

What does it mean to be "Amish"?

Unit 6 in 3ºESO talks about life in the USA. As the population grows in the U.S. (est. for 2012: 313,914,040), so do the types of lifestyles available for its people. We decided to focus in on a specific group today: the Amish. The documentary "Devil's Playground" follows around a group of Amish teens as they experiment with 'english' life during their year outside of the community, called Rumspringa. After this time, the teens have to decide whether they want to be Amish for life, or whether they would rather stay 'english' and lose contact with their family and friends forever. As you watch the clip below, think about the decisions you've made in your life. Was there ever a time where you decided to become a completely different person? Have you ever thought about living in a different country? Do you think you could stay there forever? 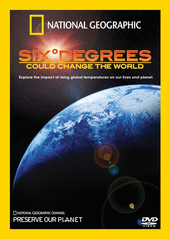 In Unit Four of their textbook, 3º ESO is working with vocabulary that has to do with the environment and pollution. Because of this, we watched excerpts from a National Geographic special called Six Degrees Could Change the World. These clips explain what would happen to the planet every time global warming causes our temperatures to rise, starting with the loss of Greenland's glaciers and ending with what could possibly be mass extinction  Though we must keep in mind that this just a theory, and that it is possible it will never happen, we must also focus on what preventative measures we can do at home to make sure that we do not destroy the planet we live on. Watch the video by clicking on the image on the left (click on "interactive transcript" if they are talking too fast) and think about your daily routine. What can you do to help reduce pollution? 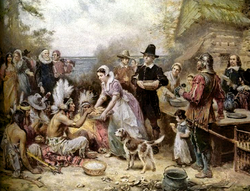 As last week was Thanksgiving, in 3º ESO and 1º Bachillerato, we decided to take a look at the famous holiday from the viewpoints of both parties involved: the English Pilgrims and the Native Americans. What we learned is that a historical event can be seen very differently depending on the historical sources you read and use. To hear the real story of Thanksgiving, click on the image on the left. To learn more about the different Native American cultures that exist in the United States, click here to visit the History Channel's website. 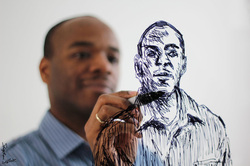 In 2º ESO we watched a video about an amazing man named Stephen Wiltshire. Stephen was born autistic and was mute until the age of three. He later found that his favorite way of communicating with the world was through his drawings. He is an inspiration and finishes the video below with this quote: "Be the best you can and never stop."

You can find his video for the UBS campaign here.
This link will take you to his gallery.
For more information about autism, click here.